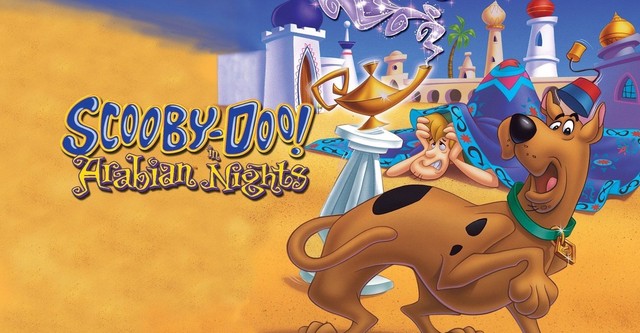 Scooby and Shaggy have found themselves a new job in Arabia, as Royal Food Tasters for the Caliph. However, after they accidentally eat all of the Caliph’s food, they find themselves running for their lives.

Join a cast of Hanna-Barbera favourites, including Yogi Bear and Boo Boo Bear, as well as Magilla Gorilla and of course, Scooby and Shaggy, in this cartoon re-telling of two stories from Arabian Nights. Albeit a simplified, and a rather silly version for the kids. The first is the story of Aladdin and the Magic Lamp, which reverses the gender roles by having a prince fall in love with a commoner girl known as Ali’addin, who turns out to be a lost Princess. The second story is a comical version of Sinbad, with Magilla Gorilla taking on the role of Sinbad.

As far as Scooby-Doo films go, this one is very different in the fact that Scooby and Shaggy aren’t in the film the whole way through. Though prominent characters in their timeline, the film’s primary focus is on its comical retelling of the stories from Arabian Nights which don’t have Shaggy and Scooby in them at all, and unlike the previous three films, this one does not include the third member of the trio, Scrappy-Doo.

Whilst this puts a lot of people off, given that they buy the DVD for the Scooby-Doo label, I honestly don’t think it’s as bad as people make it out to be. Sure its marketing as a Scooby-Doo feature length is a little off but Scooby is still in it. The plot summary and artwork on the case is very misleading, however, as it pitches this film as though Shaggy and Scooby are more involved with the plot containing the Genie (played by Yogi Bear) and Sinbad (played by Magilla Gorilla) when in fact, these characters don’t interact at all together in the film. So it’s plain to see why people were a little upset when the film didn’t meet their expectations.

The DVD I own features two special features that have already been previously seen of earlier DVD releases. The first is “Get the Picture: Scooby-Doo and Shaggy”, and the second special feature is the “America Loves Scooby-Doo” Music Video which was, both of which featured on the Ghoul School DVD.

Other than that the DVD includes the usual features such as scene selection, and all the menus have beautifully designed backdrops, with Flags as the menu icons, although on scene selection, the cursor will change into a silhouette of either Shaggy of Scooby depending on which option you choose.

Although not entirely a Scooby-Doo film, I still really enjoyed this one. The stories are brilliantly funny in that classic, old-school cartoon type of way, with a similar tone as Looney Tunes especially within the Sinbad story starring Magilla Gorilla. It’s perfectly enjoyable for fans of the Hanna-Barbera cast, but as a Scooby-Doo film, it lacks a lot of the usual aspects.

Fun as they may be, I think it’s safe to say that the four animated feature-length films that came before “Scooby-Doo on Zombie Island” (Boo Brothers, Ghouls School, Reluctant Werewolf, and Arabian Nights) are easily missable for the average viewer. Due to the disrupted formula, caused by excluding the rest of the Mystery Inc. gang, as well as any sense of Mystery Inc. in general, these films are more for the die-hard fans who love to collect and watch all films, be they good or bad in quality. None of these films are terrible in my opinion, but some feel repetitive and dragged out too long, while others simply lacked the heart of what makes a great Scooby-Doo film. We all love Scooby and Shaggy (some audiences even love Scrappy), but it seems that in my opinion at least, the feature lengths don’t really work that well when it’s just them. The rest of the gang brings a nice break in pace between Shaggy and Scooby’s antics, which makes the film enjoyable. That is why I enjoyed this film as it broke up the constant chase scenes and eating scenes that the previous films included too much of.

Scooby-Doo in Arabian Nights is available on the Warner Bros. Shop along with so many others in the franchise. Just follow the link below to buy your copy today!