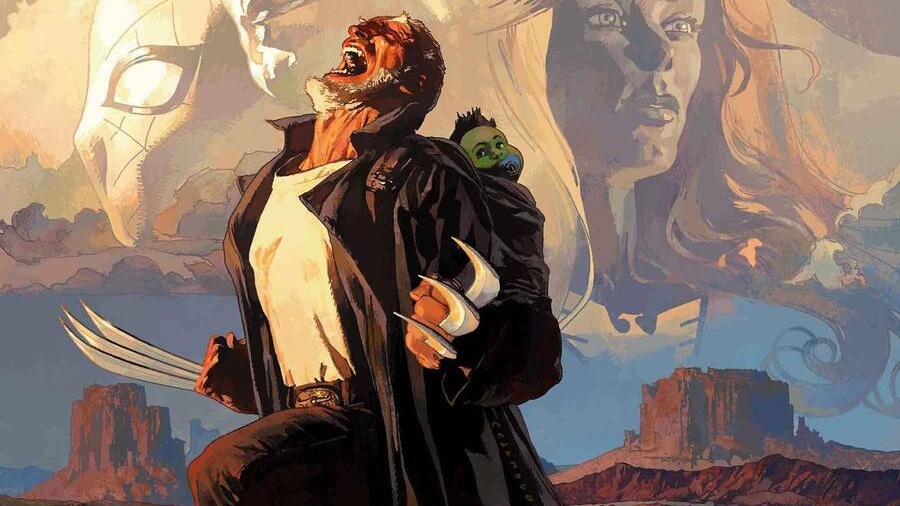 Since Wolverine: Old Man Logan finished publishing back in 2009, fans have wanted a sequel to the iconic story, to find out what happens next to both Wolverine and little baby Bruce. Well, nowadays we may not have the full sequel just yet but we do have one that was released in December of 2021, to give us just a little bit more of everyone’s favourite old man mutant. This is the first in a mini-series of Wastelanders stories which will have 5 issues all together consisting of stories about Wolverine, Hawkeye, Star-Lord, Black Widow, and Doctor Doom.

Set directly after the events of Wolverine: Old Man Logan, Logan, and baby Bruce are traveling across the wastelands, in search of food and water. Logan is pretty much left alone to his thoughts as he wonders if keeping the kid alive that fateful night was the right decision, but he still has just a little bit of hope left in him.

The old mutant must protect the kid at all costs now, against the villains and scavengers of the wastelands, such as the Ghostriders, who would happily devour human meat if it meant they could have a little fun and survive the harsh conditions of the new world, but after the events of Old Man Logan, Wolverine is no longer keeping his claws sheathed, so anyone who crosses him from this point on, better hope they don’t get on his bad side.

After finding an abandoned village, Logan realizes they are not alone, and soon gets thrown into a fight once more with an armored villain, but not just any armor. Wolverine discovers the identity of the villain beneath the armor, but fighting an old foe does not come easy in Logan’s old age.

DeKnight has done a great job bringing this story to the pages of a comic. It’s great to see Old Man Logan return to the pages to give us at least a little bit of continuity to where we left of with him setting off on his journey, carrying baby Bruce on his back.

The issue has great action, some light-hearted (and in some places dark) humor, as well as a nice recap of the previous events, for those who haven’t read the original storyline or for those who simply haven’t read it in a while.

It’s an interesting story, to say the least, and I’d be intrigued to see more development to this tale in a much longer series (similar to the original) in order to find some form of conclusion to the tale that grasped audiences in a world full of violence.

The art in this book takes on a similar style to that of Old Man Logan but has just enough of it’s own unique design to separate it and make it stand out. It’s without a doubt a stunning looking book, that brings back the characters without making the reader wonder who they’re looking at in the pages and panels of this book.

The color scheme remains a similar pallet as well, with those earthy colors being used to portray the desert wasteland that the Earth has become in this grim future where villains have taken control and destroyed all the hope in the world.

This small continuation of the classic Old Man Logan story is enough to whet any fan’s appetite, giving us even more, hope that one day we will get a continuation of the story that ends with a satisfying conclusion. Maybe Logan raises baby Banner to be the hero his father should have been, and together they defeat the villains of Earth. Maybe Logan gets his revenge on Mysterio (if he’s still around) and thus he finally forgives himself deep down, knowing he’s avenged his friends.

Either way, this is a great issue and as always a great little Wolverine story which I would recommend to any fan of Old Man Logan to pick up and read just for that little extra something to add to one of Wolverine’s greatest stories.