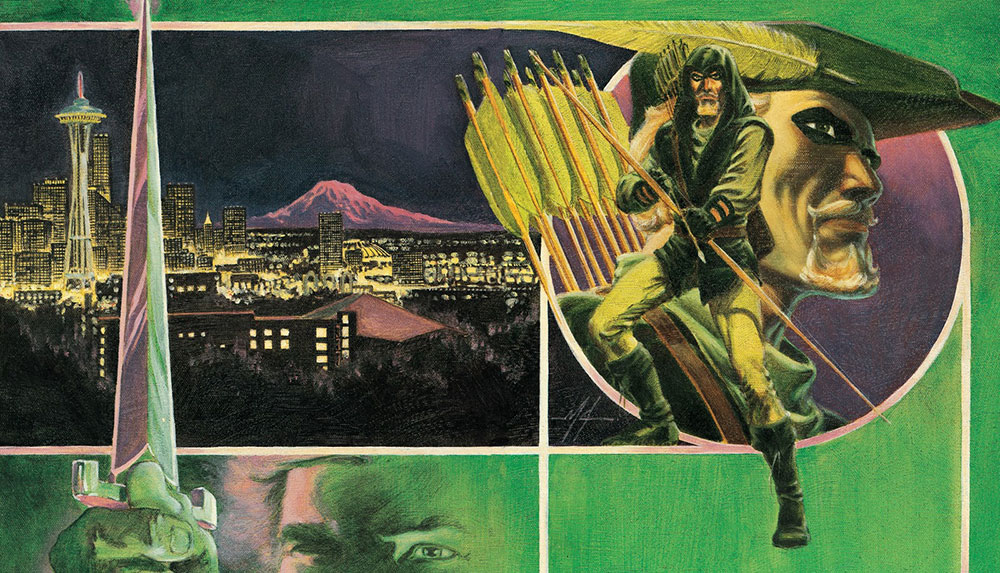 I started my comics journey with Green Arrow, I love the character, he’s my favourite DC hero, and once I started reading Mike Grell’s work in my teens, I fell in love with the more serious tone and detailed artwork from Grell himself.

I even started my comics twitter journey by creating a Green Arrow fan account which has slowly evolved over the years into what I am today, from ‘DC Quiver’ (my old handle) to Media Mallrat. But even with this blog I realised I haven’t reviewed much Green Arrow content so I guess it’s time to change that for the better.

Oliver Queen is turning forty-three and has moved away from Star City, to the crime-ridden city of Seattle with his long-time girlfriend, Dinah Lance. Settling in to their new home/business, the pair are suddenly dragged back into action when a seventeen year old girl comes crashing through their window, high on cocaine. Dinah vows to work the cocaine case, whislt Ollie turns his attention to the mysterious killer that has been slicing up prostitutes in the streets of Seattle, as well as trying to discover who the mysterious Archer is that seems to be carrying out a series of very particular targets, but what their connection might be is still unknown.

Green Arrow is given a new costume design and throws away the trick arrows for normal arrows, and this time, he’s no longer holding back, his rules have been broken. He doesn’t want to be a killer if he doesn’t have to be, but some people push their luck.

Ollie will work hard to unravel the mystery of the murders, but find himself working with an unlikely ally, a woman bearing a dragon tattoo, who appears to be working with a purpose. How far is Ollie willing to go to save the people of Seattle?

The Longbow Hunters is the first of Mike Grell’s run with the character, which was created as a mini-series of just 3 issues, which became so popular, DC granted Green Arrow his first ever full solo series, with Mike Grell in the drivers seat.

This series of three issues holds a very serious and dark plot that is a reflection of it’s time, as is much of Grell’s Green Arrow work, so if you’re easily offended by things, don’t bother, as this book takes certain tones that many writers wouldn’t dare to write, but it all fits the characters and themes of the book itself.

The art, which was also done by Grell, is highly detailed, with very vivid pencil strokes and lines that make the images feel almost like photographs. There are images of graphic violence and sexual content, which in the 80’s was rare to see in comics as they were mostly aimed at a younger audience, but Grell carried on a legacy of bringing even heroes such as Green Arrow into a more serious world that dealt with some real-world issues.

The book alters the art styles between the majority of coloured pages, to some panels being either faded in colour to portrat flash backs, or black and white pencil sketches that add drama to the drawings.

A lot of Grell’s imagery is hard-hitting, such as a page seen below which depicts Green Arrow saving the day that could have ended a lot worse for someone.

If you ever wanted to read more Green Arrow then I would highly suggest checking out the Mike Grell run which starts with this very book. Ollie’s characteristics are still there, but toned down to give him a more relatable facade that allows him to see the world as less of a playground and more of what it truly is, a world filled with scum and villainy, but one thing remains the same, Ollie always looks out for the people on the street, giving the city of Seattle, a personality of it’s own.

This three-issue mini-series kicks off a legacy of what is, in my personal opinion, one of the greatest depictions of Green Arrow to date. It allows readers to take him more seriously for starters, but as I said above, Grell’s run is without a doubt a reflection of the times in which it was written, with it’s dull views of the world and it’s use of foul language including racism, so if you are someone who is easily offended, then either approach this with an open mind or avoid it.