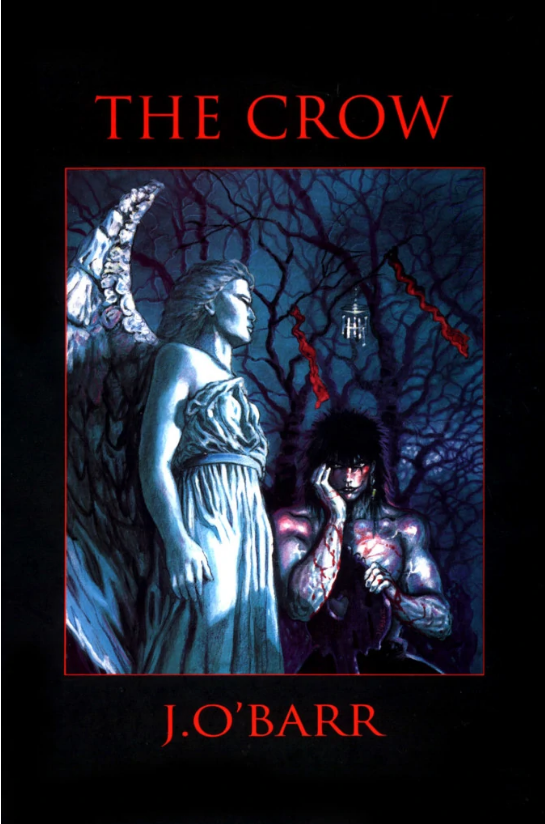 Story and Art by: James O’Barr

This graphic novel is my all time favourite. I have read it countless times, sometimes in a row. This is where it all began, and the author’s tragic backstory, really helps bring forth the emotion from the pages. It is a story of love and loss, but mostly of vengeance and a sense of mental torment that no one, dead or alive, should suffer.

There’s a belief that when someone dies, their soul is carried to heaven, hell or some form of afterlife, and this story suggests that if the soul was wronged in their life, they may return as an avenging angel, to seek vengeance on those who wronged them.

Eric and his Fiancé were murdered for no good reason, and so his soul is brought back from the dead in order to right the wrongs done to him, with some supernatural abilities, such as a healing factor, meaning that he cannot be killed (again) by mortals.

This book is all in black and white which adds to its tone of story, but that doesn’t take anything away from the incredibly powerful art that is seen on each page and in each panel. There is a heavy use of shadows in this stories imagery, which allows O’Barr to portray a creepy atmosphere and sense of danger that looms over every character and every scene in the book.

The protagonist, Eric is a troubled being who fights with his mental state to remain as sane as possible throughout his quest, and with some incredibly twisted imagery brought to life in this book, such as a beautiful horse becoming horrifically entangled in barbed wire, it really allows the reader to sympathise for Eric.

If you’ve seen the film, then I would highly recommend that you read this book for a deeper understanding of the world of The Crow, as you will discover, as I did, many key elements that were never introduced in the film, such as Eric being able to communicate with the Crow that follows him, as it tells him to look away during the previously mentioned horse scene, as well as accompanying Eric through his memories, and trying its best to keep Eric on track of his purpose. There’s also more to the story of Shelly that strengthens your sympathy for Eric, and moreover, we get the dark truth as to why they were murdered in the first place.

This book also contains poetry within its pages. Beautiful poems that really add to the emotion of the book and transitions the story. Some of the dialogue is poetic also, such as the caption which begins book two of the story, which follows the images of Eric reliving the memory of his wife being shot:

I love comics, graphic novels etc. Anything Marvel or DC, and of course indie comics, but The Crow will forever remain my favourite one among them all, because it is poetic justice written beautifully and emotionally, unlike anything I have ever read before or will ever read.