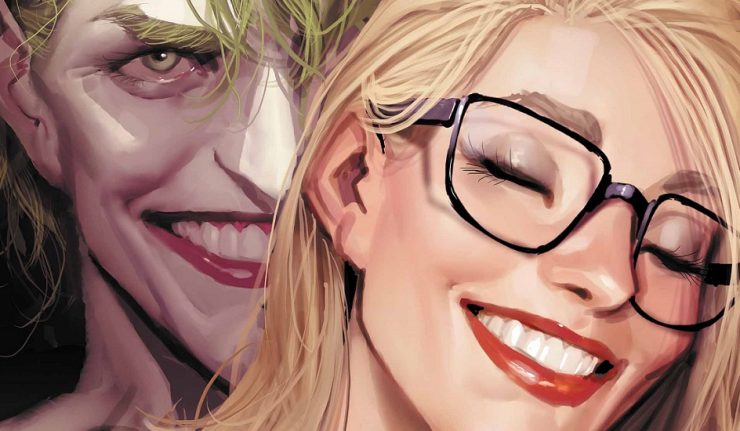 Doctor Harleen Quinzel continues her study of the patients of Arkham, but her interviews are proving less than helpful for her study into the minds of Sociopaths and Psycho’s. However, there is one patient that has peaked her interest, more so than she likes to admit. Though she tries to fight the urge to see him, to see Mr. Jay, she cannot help herself.

This book is a romantic story unlike any other (to my knowledge). It’s a twisted take of how Harleen grows to love Joker despite all her efforts to fight the feelings she holds for him which includes pity. Her interest in him becomes and obsession, as she even finds herself watching him sleep in his cell at night, but she soon realises that her increasing compassion for him isn’t entirely simple chemistry. It is the city of Gotham that pushes her own psyche over the edge. A city full of monsters, though they are not the monsters that are kept behind bars….they are the monsters roaming the streets as free men and women.

Book one concentrated heavily on Harleen alone, but book two takes a look at the rest of Gotham as we get to see Harvey Dent get acid thrown at him, which put him into a coma, and in his absence, a group of masked men execute Sal Maroni, the crime boss who threw the acid at Dent, in order to make a point about how they are dishing out the justice that the GCPD and even Batman won’t give because of the line they refuse to cross.

Seeing these events on the news, is what pushes Harleen closer to becoming the character we all know her as today, because despite how she used to feel about these sort of stories, she realises that her time with the Joker has effected her way of thinking. As the story continues, Harleen becomes more infatuated with Mr. Jay and the panels show exactly just how it happens.

As with the first book, this addition to the story gives us a closer look at Harleen’s dream sequences, her thought processes, her every emotion and how she tries to fight them. We get to see her interact with some of Gotham’s familiar faces such as Commissioner Gordon, Harvey Dent, even Batman himself, as she tries to find the answers she’s so desperately looking for. However, as she continues her journey, her study, she realises that perhaps the Joker isn’t so mad after all, and perhaps he sees the world as it truly is, but she’ll be damned if she’s going to admit it.

Joker feels very different in this story compared to his many other iterations in the comics, film, television shows and video games. With the exception of one or two moments where he feels familiarly eccentric, the majority of the time he’s with Harleen, he seems calm, and very soft. He had his moments in book one where he was the Joker we all know, but in book two, he feels less like a villain, and more like a lost soul, who hides his feelings deep down, forcing himself to feel numb until the beautiful woman comes along, and he finally finds someone to connect with. You almost feel sorry for him, which already caused controversy within the his latest adaptation in film with Joaquin Phoenix’s portrayal of the character in Joker, and much like the film, this book allows this character, who we all know to be a psychotic murderer, to tug at your heartstrings. Maybe it’s our emotion towards him alone, or perhaps it’s because of his connection to Harleen, who we are already connected to ourselves on a deeper level than we thought we could be from previous iterations of her character, but either way, as a reader, you want to help Joker yourself when you read this book, and you want him to open up about himself.

Stjepan Šejić has created something truly beautiful for the DC Black Label line of releases, as Harleen takes a character we thought we knew, and truly bring out a side to her we have never really seen. His art is beautiful and each character looks and feels more human than what we see in most comic book art. Šejić’s art is not only beautiful but it’s very unique, as I have never seen comics drawn in this style before but certainly hope to see more of it in the DC Comics universe, because there is something both appealing and unsettling about how realistic the characters appear, making them almost human, as though He was sat in the room with them as they spoke to one another. Šejić is a very talented individual who has brought us a twisted tale of romance.

Overall this book has easily become one of my favourites already, for it is a disturbing, yet beautiful love story unlike any other, which delves deep into the psyche of the titular character, but more than that, it also adapts the world around her, so that whilst we focus on one character, we also get to see what the rest of the world is doing, and still managing to tie it in to her story. I cannot wait for the third and final book, to see how her journey wraps up, no doubt with her becoming Harley Quinn as we all well know by now, but with Šejić’s writing, it will be a truly magnificent read.